Kuala Lumpur, 10 October – After four months of intense competition, the prestigious Castrol Bike Mechanic Contest 2017 came to a brilliant close, as Castrol Malaysia unveiled the best Castrol Bike Point Mechanic Team in Malaysia! Malaysian Riders felt that this is a great effort by Castrol to explore their ever supportive team or customers that has been loyal to the Castrol brand. It’s a very interesting prospects for Castrol to enhance their level of service and motor works through this kind of competition with their service.

Seizing the Grand Prize was the team from the Southern Region, where Eng Lean Hui, Sivanathan Letchumanan and Tee Kok Jing outperformed five other teams in the competition’s Grand Finale. Apart from winning the Champion’s trophy and a brand-new Yamaha 125cc scooter each, more importantly, the Grand Prize winners will also go on to represent Malaysia in the next stage of the competition – the Asia-Pacific Castrol Bike Mechanic Contest in Pattaya, Thailand, in November. There, Malaysia’s best Castrol Bike Point mechanics will compete with two-wheeler mechanics from other countries in the Asia-Pacific region including Thailand, Indonesia, Philippines, Vietnam and India. 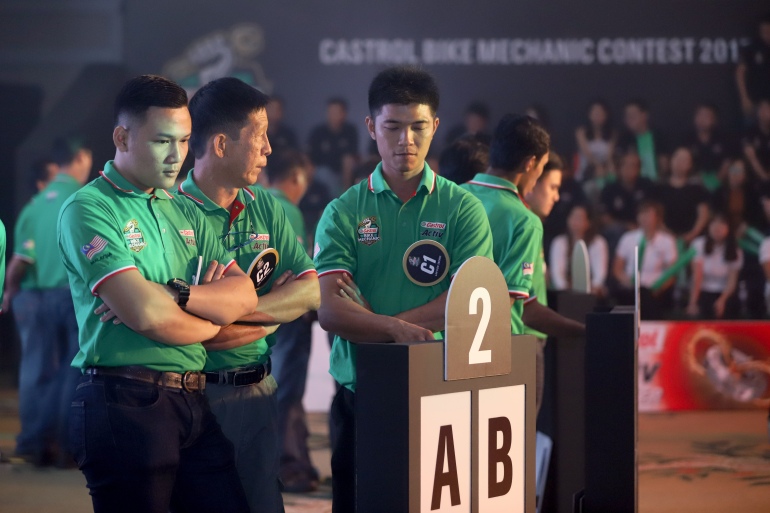 1st Runner Up was awarded to Goh Poh Joo, Tony Charles and Tan Tack Boon who represented the East Malaysian Region, while the 2nd Runner Up position went to Lim Kok Seong, Lee Yong Chang and Fakrurazi Abdul Ghafar from the Central Region.

The Malaysian Castrol Bike Mechanic Contest 2017 kicked off in June, where close to 800 contestants across the country’s five regions participated in the preliminary rounds. Out of that, only 18 mechanics, grouped into six teams of three each, qualified to advance to the semi-finals. After a gruelling battle to test their theoretical knowledge, just three teams were shortlisted to proceed to the finals to compete in a Practical Knowledge Challenge for the chance to be crowned the best Castrol Bike Point Mechanic Team in Malaysia. The mechanics were judged by an independent four-member judging team comprising of highly experienced technical & R&D experts from the motorcycle industry.

“The Castrol Bike Mechanic Contest is one of Castrol Malaysia’s many efforts to recognise and reward high level of skill amongst Castrol Bike Point mechanics in Malaysia. Through the contest, we ensure that mechanics can hone their skills further.  Castrol works to raise their technical knowledge and improve customer service. This year’s competition is particularly significant as the winners will go on to represent the nation in the Asia-Pacific competition. We are very proud to recognise the skills of our mechanics in Malaysia and will continue to support them as they prepare for the upcoming battle,” said Keow Mei-Shan, Marketing Director Malaysia & Singapore.

Speaking at the prize presentation ceremony, Eng Lean Hui said, “My teammates and I are very happy to have won this challenging competition, and are honoured to be representing Malaysia in the Asia Pacific Bike Mechanic contest end of this year. We learned a lot during this competition. As individuals we were not perfect, but together, we made a perfect team! We thank Castrol Malaysia for this opportunity. We will continue to train and update our knowledge in the run up to it, and hope that we can do ourselves, our families and ultimately the nation proud!”