Infinity Racing Suit 2012. Infinity brand under the management of Motostylestore support towards Malaysian Riders in developing it’s official racing suit was made with one thing in mind. Exploring the possibility in Malaysian motorsports and motoring industry. The development lead by Inifinity and it’s associate was not a pilot program for the suit, therefore; the template was already existed when Malaysian Riders join on board the development program. Our involvement with Infinity was only to boost their presence in the industry and contributing and extra set of data for the future development of Infinity’s racing suit. As of now, there are numbers of useful data has been shared with Infinity and Motostylestore after what seems to be an extra-committed testing by our test rider Muhammad Rashidi.

LOOKS
The Malaysian Riders’ official racing suit can be said as one of the many racing suits that can turn your head when our test rider walk past by. The look is rich and fine in terms of the color and the texture of the suit. Everything seems right and seems professional, that’s the best part of this Infinity racing suit 2012. The option to customize the looks of your suit with Infinity gives an addition plus point to the brand. With that, the suit was able to sustain it’s presentation well even after nearly 2 years of usage, the Infinity racing suit still maintain it’s visual presentation even with some of it’s battle scars.

COMFORT
Racing suit generally developed with focus more on the safety aspects in protecting the rider rather than it’s comfortability. With that said, generally; racing suits are supposed to provide initial or first impact protection for it’s wearer when he or she involved in a crash. In general as well, wearing a suit will not be something that we can call as a comfy outfit. It’s tight and sometimes can be a little be restricting to move as a normal person would. So to use a racing suit as a normal apparel is just wrong and it’ll be super uncomfortable. But on a bike, this Infinity racing suit 2012 fits nicely to our test rider’s body shape and it’s loose enough for him to move about on the bike. One downside that our test rider can say is that the suit is a little bit heavy to be compared with some higher range racing suit. On that note, that just give a pros and cons to it’s usage. The Infinity racing suit 2012 weight might be a small downside to a rider if he or she is to be competing in a motorcycle racing. The type of leather used to make the suit contributes towards this weight and it is quite thick in dimension. The suit then was able to withstand an improper care and the nature’s ever changing climate. The ventilation on the suit helps in terms of cooling down the wearer’s temperature while riding in a sunny day especially in Malaysia’s notorious and unpredictable climate.

SAFETY
In terms of safety is where this Infinity racing suit shines, based on it’s development cost and the type of leather it uses; our test rider were confident to give this racing suit a GO to anyone who are looking to own his or her own racing suit at an affordable price. The level of protection that it gives is great and this was proven after more than 3 times of our test rider’s crashes on track [See one documented crash as a prove]. The Infinity racing suit 2012 managed to hold it’s integrity during the crash which ultimately protects our rider’s safety. Abrasion injury was the only one sustained due to the friction and the force between the inner side of the racing suit and the layer of inner worn by our rider. But we would only recommend the usage of the racing suit in dry condition as it was tested to be able in keeping itself together without failure. In a wet condition, it’s inconclusive to weather the suit is able to withstand the friction and the impact. But under it’s usage with our test rider in wet condition, it still works as a racing suit should. 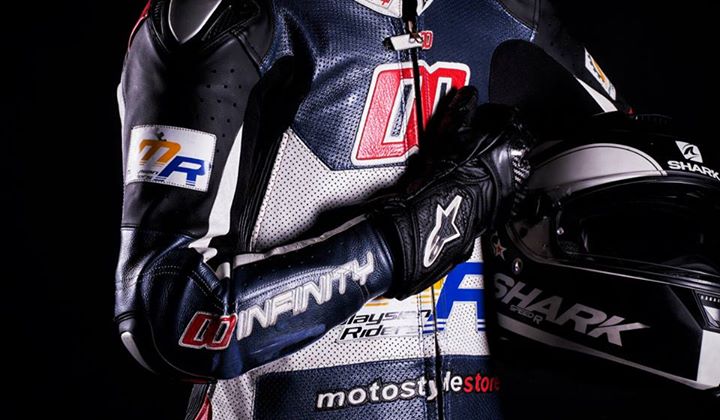 QUALITY
There are several aspects of the racing suit that can be touch in terms of built quality. There are the external built quality, internal built quality and the stitching. The external built quality shows a level of workmanship that is smooth and clean in the process. When it was first received to Malaysian Riders, it sure was in a perfect looking condition with every single side of the suit looks neat and tightly made. The internal on the other hand shows a slight roughness and felt a little bit rough when it was first worn by our test rider even up till now. But the internal roughness does not get in the way of the riding movement for the rider, it’s only a little bit of a nuisance after wearing the suit for some time. The stitching work on this suit was great and that sums up the quality of the suit and it certainly holds well even after a number of crashes with the suit.

VALUE
Overall, the racing suit certainly is a value for money for the quality that it offers. But of course, it’s not as perfect as a much higher price mainstream racing suits from the bigger brands out there. But that is all depends on the perspective you are looking at and the angle that you are looking to, if you’re a MotoGP rider; this will definitely be a NO GO racing suit for your racing needs. But if you’re looking to go into a casual trackdays or training session and some lower level of racing, this might just do the work. For our test rider, the 2 years he spent riding and racing with the suit gave him an incredibly amazing input towards how he should be working towards understanding the motorcycle he testing and competing in some local races. The Infinity racing suit 2012 works well to be getting out of his concern as much as possible so that he may focus on the riding more is already a huge plus point for the suit and the brand.

Opinion made here and all the inputs comes from a personal reflection given to Malaysian Riders from it’s official test rider Muhammad Rashidi following from his 2 years of work with Infinity’s racing suit.

[Disclaimer: We cannot guarantee the similar quality for each item produced and horrific crash can cause severe injury or death depending on circumstances]