When it comes to making a great bike even greater, Ducati is probably one of the top contender in doing so. It is hard not to take notice on their latest effort in creating some sub division of their already successful motorcycle. This particular bike was derived from the stunning looking Hypermotard which was first introduced back in 2005. now, a few years later; Ducati has given the motard platform a new ground to be given to their loyal ducatisti.

For 2013, Ducati had given to their fans to choose on a new ground for the motard platform. The bike is known as the Hyperstrada, a touring version born from the platform of Hypermotard. The all new Ducati Hyperstrada is set to offer a great riding experience for an extension distance to their owners. But is it really a great bike? For that, you can watch our short film review and it was done in such a hurry due to the limited time for our test rider to test out the bike.

When talking about the Hyperstrada and since it was designed solely for the purpose of extending the kilometers travel by the bike, it is only natural that our test rider took it for some long distance ride. Our official test rider clocked nearly 620KM of distance in his test. Since it was done in such a short period, he can’t really says everything he needs to share in the film review. Therefore, the extension of the review will be put onto words here in Malaysian-Riders.com.

Let’s discuss on the fuel consumption, since the Hyperstrada are meant for the touring side of riding. Ducati has decided to make the fuel tank larger and that 16 liters of fuel capacity is really a great introduction to the bike’s needs. However, the lack of fuel level indicator really puts the rider in a guessing status in each ride as the fuel consumption is not consistent and depends highly on the way a rider wants to really ride the bike. Just to be safe, keep re-fueling every 250km or else you’ll be doomed. 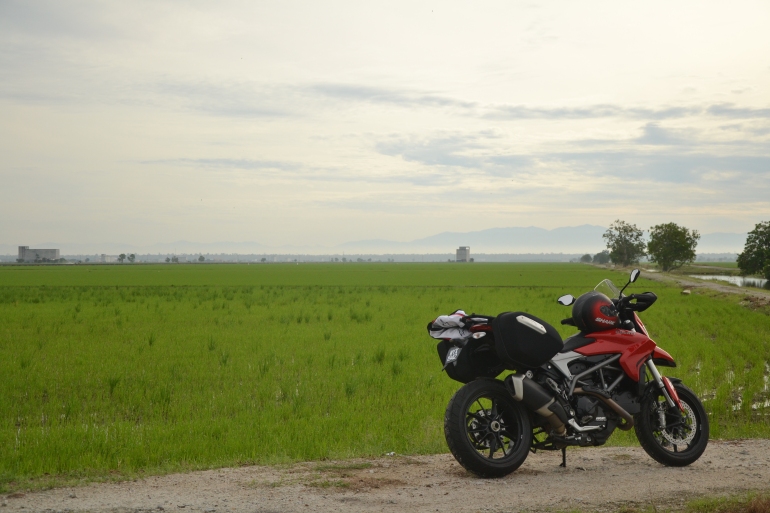 The whole bike is nicely balanced hence making the ride so easy that you felt like riding a 250cc multi-purpose motorcycle and it is not until you twist the throttle that you’ll know this is a whole different level of motorcycle. The bike’s modes are really just basic, assisted with a pre-set traction control and ABS setting it really gives the rider not much option to adjust. But we really have to say that it doesn’t really need any tweak as the bike is already performing at a phenomenal performance for it’s range.

The tire is great for the use of touring but it might not be as suitable to go all out in cornering as it doesn’t gives you as much grip as you need. There are some points that the tire actually skid around due to the immense power delivered to the real wheel. But that is part of the excitement offered with the Hyperstrada. Going further down to the suspension setup, we have to say that it is quite soft which has it’s pros and cons. The positive side is that you’ll have a great smooth and comfortable ride on a bumpy road, but then then re-bounce of the suspension might cause the bike to go too deep at the center which usually happens during a corner. This led to the finding of our test rider that the bike will hit the center stand a little bit.

This resulting for a higher risk for a rider to be involved in a silly incident and can really affect the rider’s confidence in riding the bike at some speed. Apart from that, there are not much else to be said regarding the bike. The price of the Hyperstrada starts from RM60,000 onward. From our extremely short film review session, we can’t really say much more about the bike and this calls for a session of re-filming the bike to create a properly entertaining and informative episode on the bike.

Stay tuned with us for more in Malaysian Riders and we are surely hoping that we will continue to gain the support from all of you readers and viewers of our show. We are working hard in order for us to improve the quality of the show. We would like to encourage all of our readers to head on to our Facebook Page and LIKE it, not to forget in SUBSCRIBING to our Youtube Channel.