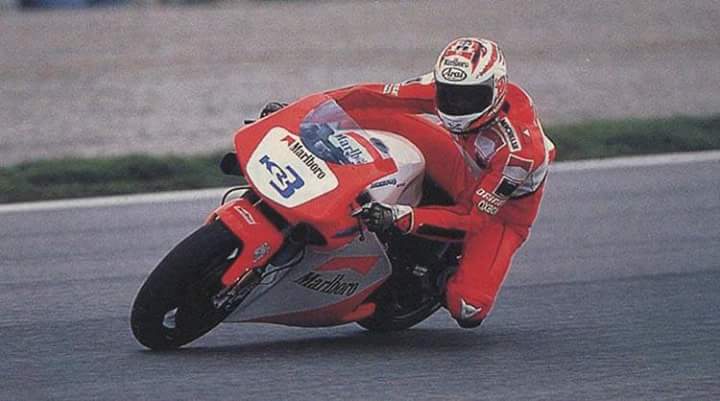 It was the end of 1996 and the Marlboro Yamaha Racing Team knew they needed to find a new team manager to replace Kenny Roberts sr., after more than 25 years with the Japanese powerhouse. The exit by the Modesto, California born legendary rider was due to the launch of his top-secret project, which already started in May of 1996: he announced a completely new, own-designed, bike and the participation to the 1997 season of motorcycle Grand Prix under his own racing team.

This technological challenge was not surprising for those who knew well King Kenny: as a rider, he developed the switch to V4 layout to replace the wider inline-4 engine during 1981-1982 seasons. The effort did hurt his chance to defend his title. Even if the 500cc category was far more cheaper than the following, 4-stroke MotoGP, this project proved to be a difficult endeavor for his team, both in terms of financing the project and also the technical know-how. This is where he then decided to collaborate with a young motorcycle brand and manufacturer, known as Modenas.

The Malaysian-based manufacturer was founded back in 1995: even if it was still learning in many way, it was highly motivated to innovate and be at the top. Featuring a technical partnership with Kawasaki, the young Modenas looks to be to be in tune with the ambition of Team KR to challenge the status quo of the 500cc arena. Team KR was realistic and rational in the approach, as they knew it would be almost impossible to beat the Japanese firms with similar weapons: so they decided to focus on a different and extremely innovative package. Many concepts applied to the KR3 project and its successors have been highly influenced by Formula 1 technology: in order to have an easier access to it, the team was based in Banbury, UK, where the most winning F1 teams take place.

The engineers of the Team KR opted to use a 3-cylinder engine rather than the usual 4-cylinder; in the first version the counterbalancing shaft was absent in order to lower the weight, after Roberts’ consideration that the gap of power from the V4 could be overcompensated by superior handling, given by lightness and narrower front section of the bike. This idea came from his riding experience, as he battled against Freddie Spencer and his Honda NS500 triple in the early 80’s. In the effort to reduce the gap in top speed performance from the V4 machines, Roberts discarded the indirect injection layout for the feeding system, due to the complexity of its management. Electronic pressurized carburetors, without floating bowl, were then adopted, while a super-aerodynamic bodywork with underbody, ducted radiator (similar to what can be found on a Formula 1 car), was designed by Lotus (part of Proton/Modenas group). The project were made possible through an important technical partnership between the Team KR and Tom Walkinshaw’s TWR, which victorious LMP and Formula 1 cars, such as the Jaguar XJR-14 and the Benetton-Ford B194 that gave to Michael Schumacher his first world championship.

After a hectic struggle in the motorcycle development, the final challenge was choosing the right people to ride the bike. In the end, were engaged the former AMA motocross champion Jean-Michel Bayle, along the rookie Kenny Roberts jr., who showed sparks of talent in 250cc. With everything in place, the journey of Modenas-KR Team started in 1997.