How the Young Malaysian Shine On International Stage

Satu HATI. Honda Team Asia was established in 2012 with a mission to develop Asian motor sport. During the first year, the team started with two Japanese riders and one Malaysian rider – Azlan Shah. Among the Japanese riders, Makoto Tamada who is an experienced legend rider who won MotoGP in 2004. This marked the beginning of the story for young Malaysians competing in the World class endurance race.

In the first year of 2012, they crossed the grid line at 25th. For the second year, Azlan Shah was invited again, and the team managed to get 6th place with Tamada and Yuki Takahashi who is also MotoGP rider. On the following year, 2014, Tamada became the team manager and three riders were formed from Malaysia, Indonesia and Australia. The other Young Malaysian called Mohamad Zamri Baba joined the team and resulted in 7th place in 2014. As Team Manager, Tamada started his vision to establish a “pure” Asian team, which includes not only riders, but also mechanics, as well as managers from Asian countries.

This decision does not come in sudden as Tamada has dreamt to build an independent Asian team, not limited to rider, on international stage since his career in Satu HATI. Honda Team Asia in 2014 as Team Manager. The effort can be seen when he first setup the Asian rider team in 2015 to compete with other MotoGP rider and yet getting Best Honda Team title at 8th place in 2016.

Makoto Tamada started his riding career in 2012 as part of the Satu HATI. Honda Team Asia and has been part of MuSASHi Boon Siew Honda in ARRC. In 2014, Tamada decided to become the team manager of Satu HATI. Honda Team Asia and has been managing the team up till the 39th Coca Cola Suzuka 8 Hours Endurance Race. As Team Manager, Tamada started his vision to establish a “pure” Asian team, which includes not only riders, but also mechanics, as well as managers from Asian countries.

This year, his dream is about to come true as he has appointed Zulhelmi Ahmad and his team from Boon Siew Honda Motorsports Malaysia to lead and manage the Satu HATI. Honda Asia Team for this year’s 40th Coca Cola Suzuka 8 Hours Endurance Race. 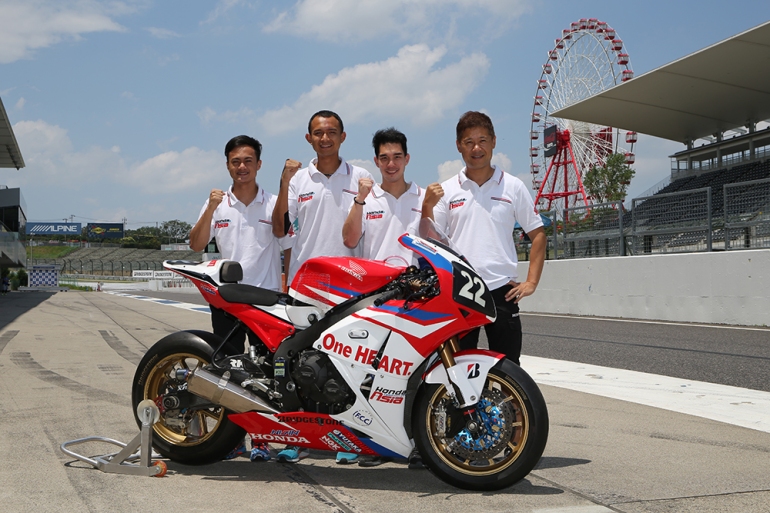 Zulhelmi is the first Malaysian appointed by Makoto Tamada together the Chief Mechanic, Muhammad Zarul Bin Sirat and Chief Data engineer, Mr Mohamad Redzuan Bin Kamis to lead the Honda Team Asia. The Honda Team Asia formed among Zaqhwan Zaidi (MY), Ratthapong Wilairot (TH), and Dimas Ekky Pratama (IN) who managed to finish the race at 8th place in last year’s Suzuka endurance race will be supported and supervised by Zulhelmi and team.

“It is truly an honour for Tamada-san to appoint me as the team manager for Honda Asia Team. We have faith in Tamada’s decision as well as the riding team hence we will do our best to bring victory for Malaysia and uplift BSH name to another stage in the arena” said Zulhelmi.

In 2002, Zulhelmi started off his riding career at Malaysian Cub Prix and retired as a professional rider for BSH in 2007.  With the dreams of following his passion, he joined BSH in 2010 as a team coordinator for Musashi Boon Siew Honda Racing and was promoted as team manager in 2016. Zulhelmi leadership and guidance has lead local riders such as Khairul Idham Pawi, Zaqhwan Zaidi and Azlan Shah Kamaruzaman in winning championships and podium finishes.

Over the years, BSH has been passionate in developing the young local motorsport enthusiast by providing various platform for an individual to grow and achieve success in their motorsports career. This is proud achievement for BSH to have the local team competing at a global stage.

“I would like to express my gratitude towards BSH for providing me an opportunity to be part of BSH Motorsports. Throughout the years, BSH has been very supportive towards my leadership and vision as the team manager and we will do our best to uplift BSH’s name in the global stage” said Zulhelmi.

Prior to joining Boon Siew Honda, Muhammad Zarul started his career as a mechanic for Motocross Malaysia for almost three years before officially joining at Boon Siew Honda in 2009. Over the 8 years of this service as a mechanic, Zarul was the backbone for MUSASHi Boon Siew Honda Racing team riders in a range of two-wheel motorsports event such as Suzuka 4 Hours, ARRC 600 as well as Suzuka 8 Hours. He passion and commitment has led some of our riders such as Emir Firdaus and Zaqhwan Zaidi into champions.

Mohamad Redzuan started off as mechanic for Boon Siew Honda since 2010. Bringing on his experience as racing mechanic for a private team in Malaysian Cub Prix, Redzuan has been one of the core mechanic team supporting the MUSASHi Boon Siew Honda Racing for over 7 years. Similar to Muhamad Zarul, Redzuan has participated to array of motorsport racing events and has helped to riders such as Azlan Shah, Zambri Baba and Zaqhwan Zaidi.

The 40th “Coca-Cola” Suzuka 8 Hours Endurance Race will be happening on the 28 July till 30 July.